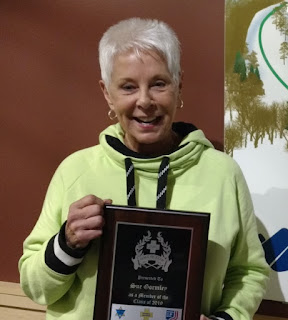 The announcement that Susan (Sue) Gormley was inducted into the National Ski Patrol Hall of Fame was made at the Hyland Hills OEC Refresher on Sunday October 13, 2019.


Susan Gormley joined the National Ski Patrol at Hyland Hills in 1980 and has been a patroller at Hyland Hills and in the Western Region of the Central Division her entire patrolling career.   As a  fellow patroller, many know Sue as an OEC and OET Instructor, a mentor, a leader and a friend.


Simultaneously, Sue became one of the first WEC Instructor Trainers in the Country and traveled extensively coordinating training programs that created the first WEC Instructors in the Central Division.  Sue then helped create a quality assurance program to ensure that the WEC program was taught correctly.  Sue became one of two Divisional WEC Supervisors in 1987 and served in this role until 1989 when she stepped down to become the Hyland Hills Patrol Director, from 1989 to 1993.


Although she was no longer the Division Supervisor, Sue remained an Instructor Trainer and continued to contribute to the WEC program (now known as Outdoor Emergency Care (OEC)) by being involved as contributor to the development of four OEC Skill Videos, including participating in the filming of the 1994 OEC Spinal Immobilization Video at Wild Mountain Ski Area.  Sue also leveraged her career as a lead emergency response trainer for Mesaba Airlines to work with Julie Rust of the Professional Division to develop the Outdoor First Care Program, an ancillary program for Ski Areas.  Finally, Sue volunteered to host and coordinate one of the 20 Pilot Programs for the Senior OEC Program, including providing extensive feedback for the development of the Senior OEC Program Material that was published in 1993.


Sue returned to being a Central Division OEC Supervisor in 1993 and in that position, continued to work as a lead Instructor Trainer in the role out of the next wave of the OEC program.  Including especially, starting the process of re-certification of OEC Instructors.  During this time, Sue volunteered to assist with the role out of the re-certification program in Alaska, Intermountain and Rocky Mountain Divisions and attended OEC Events in Eastern, Pacific Northwest and Southern Divisions.


Sue became the Assistant National OEC Supervisor and served in this role from 1996 - 2000.  During this time, she worked to streamline OEC administrative procedures and simplify OEC program material.   Sue contributed to the 3rd edition of the OEC Book and was one of the co-editors and coordinators for the 3rd edition Instructor Manual and Student Workbook materials.


After ending her time as Assistant National OEC Supervisor, Sue contributed to the 4th edition of the OEC Book and related Instructor Manual and Student material.   Sue also remained an active OEC Instructor Trainer in the Western Region until 2006.


Sue has been honored with many NSP awards including a National Appointment, a National Distinguished Service Award, and several Yellow Merit Stars.


During Sue’s carrier, Sue has been and remains a fierce advocate for candidate and patroller training programs of the NSP.   Her advocacy is inspirational and gives all of us an example of what we can do to make and keep the National Ski Patrol a strong and vital organization.


Submitted by Jeffrey Olsen
Posted by NSP-C Western Region at 9:02 AM No comments: